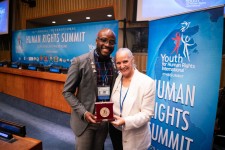 NEW YORK, July 18, 2019 (Newswire.com) - By 18, Travis Ellis had nearly destroyed his life with drugs. That’s when he began to turn his life around and started helping others escape from the trap that nearly consumed him. Raised by a single mother in Washington, D.C., he grew up in a part of the city notorious for gang violence, crime and drugs. Now, a Christian pastor and a hip hop artist, Ellis’ human rights advocacy earned him a Human Rights Hero award at the 16th annual International Human Rights Summit of Youth for Human Rights International, held at the United Nations in New York.

Ellis has dedicated himself to mentoring troubled youth. But what do human rights have to do with his purpose of empowering them to make the most of their lives? “When young people know their human rights, they gain a newfound respect for themselves and their peers,” he says.

He uses the materials of Youth for Human Rights in his outreach. “Having lived in a city where violence is often the first response, I knew instantly that a tool like the human rights curriculum is needed, and also will allow me as a mentor to teach my peers the value of responsibility and the freedoms of life and safety,” he says.

“When young people know their human rights, they gain a newfound respect for themselves and their peers.”

He received the award from Youth for Human Rights International President Dr. Mary Shuttleworth before an audience composed of youth delegates and ambassadors from 45 nations, government officials, UN ambassadors and representatives of diplomatic missions, and members of NGOs and nonprofits from around the world.

This year’s Summit was sponsored by the Permanent Mission of El Salvador to the UN and was co-sponsored by the Permanent Missions of Ghana, the Gambia and the Republic of Moldova. Other cosponsors included the National Human Rights Commission of Mexico, the Human Rights Department of the Church of Scientology International, the International Union of Bilateral Chambers of Commerce and Industry, the Foundation for International Democracy of Argentina, the African Diaspora Foundation, Karna Positive Trust of Nepal, the Gandhi Global Family, and the Art and Culture for Human Rights Foundation of Italy.

Watch the Summit on UN TV.

Youth for Human Rights International (YHRI) is the youth component of United for Human Rights (UHR). It is a global nonprofit organization founded in 2001 with the purpose to inspire youth to become advocates for tolerance and peace by educating them on the United Nations Universal Declaration of Human Rights.

UHR has now grown into a global movement with over 150 chapters and its educational materials are translated into 27 languages, bringing the message of human rights to 195 nations. The Youth for Human Rights public service announcements and The Story of Human Rights educational film air on the Scientology Network in 17 languages and on hundreds of other television stations around the world.

The Church of Scientology and Scientologists support United for Human Rights and make their educational materials available free of charge. For more information visit the Scientology website or Scientology.tv.

Get notified about new releases.